Part of growing up is realizing you learn to love so many people. It’s about forming those relationships and finding what will last forever. Check out our awesome collection of Funny Relationship Quotes

Growing up, I was in love with Jennifer Aniston from ‘Friends.’
Check out our awesome collection of Quotes About Growing Up

You don’t disrupt genius at work.

Yeah, I’ve only been acting since I was 18 out of high school.

I love baseball – ‘Moneyball’ was my favorite book when I was 13.

When a chick has a sense of humor, there’s nothing more attractive.

I never have an opinion about clothes and know nothing about fashion.

I don’t really give much thought to the roles that I’d ideally love to play.

I just happened to step into acting. And now I can’t imagine myself doing anything else.

The thing I like a lot about acting is I’ll never learn enough. I’ll never know it inside and out.

My heroes are guys like Tom Hanks, Leonardo DiCaprio, and Matt Damon. These are amazing actors with amazing careers that every actor should aspire to. I’m not saying I’m going to get anywhere close. It’s not going to be an easy feat. I’m just in awe of their careers.
Check out our awesome collection of Funny Hollywood Jokes

I’m never offered any sort of roles. I need to audition in a typically lengthy process to receive roles.

In high school, girls started wearing high-waisted pants with their shirts tucked into them. I don’t get what that’s about.

The perfect date is the one where anything and everything goes wrong, but at the end of it, all you want is to see them again.

I feel like I’m good with girls. I understand them and am good at loving them. I’ve always felt like that’s been natural for me.

I didn’t have that many friends my first few years of high school. It was very cliquey and I’m super shy, so it was hard to make friends.

I just want to work with good filmmakers and do good projects that mean something to me and play interesting characters. That’s really it.

I’d like to get into some sort of workout regimen so I can properly be healthy and exercise like a normal human being. I seem to not do that… ever.

I’m always a little innately shy when I first talk to a girl, and I think I always will be! But I think that’s a good thing. You don’t want to lose that.

With TV, you just have to finish the days and get the episodes out. And it’s always going to be an impossible schedule. That’s the funny thing with TV that not a lot of people realize.

I moved to California when I was twelve and I got a video camera and made little movies because I didn’t have any friends yet. I would force my sister to make these movies with me – which became my YouTube channel.

I just really like fun, cool, interesting, quirky girls. And sometimes you find that in 6’2 model bodies and sometimes they’re short and brunette. All shapes and sizes – it’s really about the personality. That sounds cliche, but it’s so freaking true!

I was in school, but I wasn’t into school. I wasn’t doing what I wanted to be doing in school, which was film studies. That was what I intended on doing, but I didn’t go away to a university because I wanted to stay in L.A. and audition while I took classes, so I elected to go to a community college and just take G.E. courses. It was terrible. 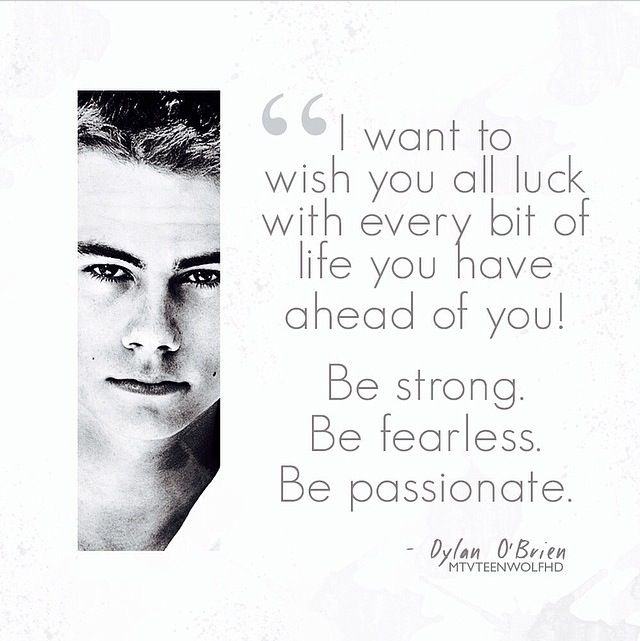 Liked these Dylan O’Brien Quotes? Then share them with your friends.