Big Lebowski Quotes: 17 Most Awesome Quotes From This Movie 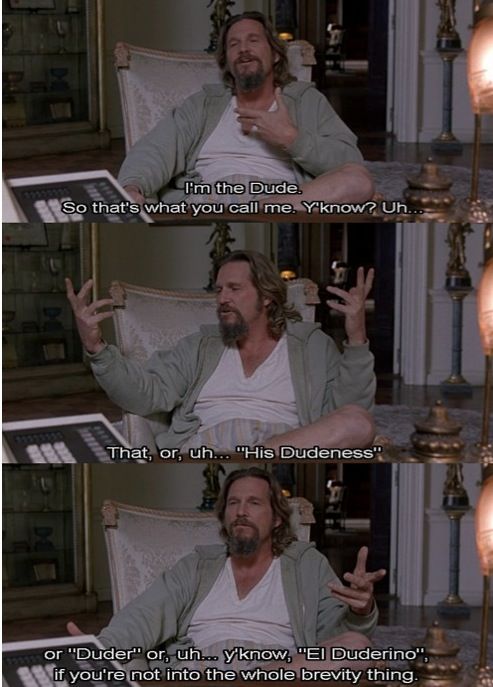 The Dude: Walter, I love you, but sooner or later, you’re going to have to face the fact you’re a go**amn moron.

The Dude: [repeated line by The Dude and others] That rug really tied the room together.

Share these Big Lebowski Quotes with all your friends

Walter Sobchak: I’m saying, I see what you’re getting at, Dude, he kept the money. My point is, here we are, it’s shabbas, the sabbath, which I’m allowed to break only if it’s a matter of life or death…
The Dude: Will you come off it, Walter? You’re not even f***ing Jewish, man.
Walter Sobchak: What the fu** are you talkin’ about?
The Dude: Man, you’re fu**ing Polish Catholic…
Walter Sobchak: What the fu** are you talking about? I converted when I married Cynthia! Come on, Dude!
The Dude: Yeah, yeah, yeah, yeah…
Walter Sobchak: And you know this!
The Dude: Yeah, and five fu**ing years ago you were divorced.
Walter Sobchak: So what are you saying? When you get divorced you turn in your library card? You get a new license? You stop being Jewish?
The Dude: It’s all a part of your sick Cynthia thing, man. Taking care of her fu**ing dog. Going to her fu**ing synagogue. You’re living in the fu**ing past.
Walter Sobchak: Three thousand years of beautiful tradition, from Moses to Sandy Koufax…
[shouting] Walter Sobchak: You’re goddamn right I’m living in the fu**ing past!

[Maude shows the po** video starring Bunny to the Dude] Sherry in ‘Logjammin’: [on video] You must be here to fix the cable.
Maude Lebowski: Lord. You can imagine where it goes from here.
The Dude: He fixes the cable?
Maude Lebowski: Don’t be fatuous, Jeffrey.

The Dude: What’s in the fu**in’ carrier?
Walter Sobchak: Huh? Oh, that’s Cynthia’s dog. I think it’s a Pomeranian. I can’t leave him home alone or he eats the furniture. I’m watching him while Cynthia and Marty Ackerman are in Hawaii.
The Dude: You brought the fu**in’ Pomeranian bowling?
Walter Sobchak: What do you mean brought it bowling, Dude? I didn’t rent it shoes. I’m not buying it a fu**ing beer. He’s not taking your fu**ing turn, Dude.
The Dude: Man, if my fu**in’ ex-wife asked me to take care of her fu**in’ dog while she and her boyfriend went to Honolulu I’d tell her to go fu** herself.

The Dude: Yeah, well. The Dude abides.
The Stranger: The Dude abides. I don’t know about you but I take comfort in that. It’s good knowin’ he’s out there. The Dude. Takin’ ‘er easy for all us sinners. Shoosh. I sure hope he makes the finals.

Best Quotes From The Big Lebowski – Our Favorite Video

Jesus Quintana: You ready to be fu**ed, man? I see you rolled your way into the semis. Dios mio, man. Liam and me, we’re gonna fu** you up.
The Dude: Yeah, well, you know, that’s just, like, your opinion, man.
Jesus Quintana: Let me tell you something, pendejo. You pull any of your crazy sh** with us, you flash a piece out on the lanes, I’ll take it away from you, stick it up your a** and pull the fu**ing trigger ’til it goes “click.”
The Dude: Jesus.
Jesus Quintana: You said it, man. Nobody fu**s with the Jesus.
Walter Sobchak: Eight-year-olds, Dude.

[first lines] The Stranger: [voiceover] Way out west there was this fella… fella I wanna tell ya about. Fella by the name of Jeff Lebowski. At least that was the handle his loving parents gave him, but he never had much use for it himself. Mr. Lebowski, he called himself “The Dude”. Now, “Dude” – that’s a name no one would self-apply where I come from. But then there was a lot about the Dude that didn’t make a whole lot of sense. And a lot about where he lived, likewise. But then again, maybe that’s why I found the place so darned interestin’. They call Los Angeles the “City Of Angels.” I didn’t find it to be that, exactly. But I’ll allow there are some nice folks there. ‘Course I can’t say I’ve seen London, and I ain’t never been to France. And I ain’t never seen no queen in her damned undies, so the feller says. But I’ll tell you what – after seeing Los Angeles, and this here story I’m about to unfold, well, I guess I seen somethin’ every bit as stupefyin’ as you’d see in any of them other places. And in English, too. So I can die with a smile on my face, without feelin’ like the good Lord gypped me. Now this here story I’m about to unfold took place back in the early ’90s – just about the time of our conflict with Sad’m and the I-raqis. I only mention it because sometimes there’s a man… I won’t say a hero, ’cause, what’s a hero? But sometimes, there’s a man. And I’m talkin’ about the Dude here. Sometimes, there’s a man, well, he’s the man for his time and place. He fits right in there. And that’s the Dude, in Los Angeles. And even if he’s a lazy man – and the Dude was most certainly that. Quite possibly the laziest in Los Angeles County, which would place him high in the runnin’ for laziest worldwide. But sometimes there’s a man, sometimes, there’s a man. Aw. I lost my train of thought here. But… aw, hell. I’ve done introduced him enough.

Liked The Big Lebowski Quotes on this page? Then share them with everyone you know.